A Brief History on Tattooing! | Authent/Ink

A Brief History on Tattooing!

Sometimes it feels like tattoos are everywhere. It feels like everyone has a tattoo, both genders, all ages, all walks of life. It seems to have just sprouted up recently as it now widely accepted in mainstream circles in Western culture.

But it wasn’t always like this… and in some cultures, it is still largely underground.

The oldest discovery of tattooed human skin was in 1991, on the frozen body of Ötzi the Iceman, and he was dated between 3370 – 3100 BC. He had 61 carbon tattoos, consisting of mostly dots and lines. Tattooed mummies have also been found across the world and across cultures, in locations such as Greenland, Alaska, Siberia, Mongolia, China, Egypt, Philippines and Russia, up to 3000 years old. In some ancient cultures, tattoos were done as a symbol of belief and religion. In other cultures, they were the marks of aristocracy or wealth, and in stark contrast some cultures used them as marks to warn for potential danger, and criminals were the only ones getting tattooed. Some tribal cultures used tattooing to safeguard themselves from evil and preserve health. Slaves were even tattooed as a sign of ownership

The Western world took a lot longer to embrace tattoos. There were no “gentlemen” walking down the streets sporting tattoos. It was sailors who first popularised tattoos. Still, not considered gentlemen, as officers would never get tattooed. According to records, it was the crew of Captain James Cook that first began getting tattoos, as mementos of their travels to Japan, China and the Pacific Islands, where tattooing already existed.

Tattoos in the Western world were for people who did not conform to the restraints of mainstream society. In America, after WWII, tattoos were associated with bikers, juvenile delinquents and other minorities that were considered criminals. There was little respect for tattoos amongst civilised society. Whilst many shops had sterilisation equipment, they were rarely used and hygiene standards were low. There were outbreaks of hepatitis, and reports of blood poisoning and other diseases. For a time, it was actually illegal to tattoo in many states in the US. Tattoo parlours went underground, and only the shops with the best reputation for quality work survived.

It took until the 1970’s for tattoos to become part of mainstream Western fashion, becoming common among both sexes, to all economic classes, but still mainly youth focused.

These days, it is common to see tattoos everywhere. And it is even popular to see tattooed models to be used in fashion and tv campaigns for all sorts of products from high end cosmetics, cars and household appliances. It has crossed all social boundaries from “high” to “low” class. There has also been a shift in iconography where tattoos were mostly done from “flash”, it has grown from its exotic tribal and Japanese roots into “sleeves”, now being the mainstream form of tattoo. With the rise in tattoo related TV reality tattoo shows, the general public are more aware than ever of the tattoo industry. With the likes of Miami Ink, and Tattoo Fixers, the average person is getting a rather skewed perspective of the tattoo industry. There is definitely a conflict of interest when clients are wanting a long lasting piece of art of their bodies, and the producers are wanting ratings for their shows.

Now, in NSW with the introduction of the tattoo licensing laws just a few years ago, typical tattoo street shops have been replaced with custom style private studios. Just as it did in New York in the 60’s, the quality studios will prevail as the industry again goes “underground”. Do your research, read reviews, and seek out the best studios. Walk on past the street shops, and don’t bother with the “celebrity” tattooers closed book policies. Look for REAL, not REALITY! 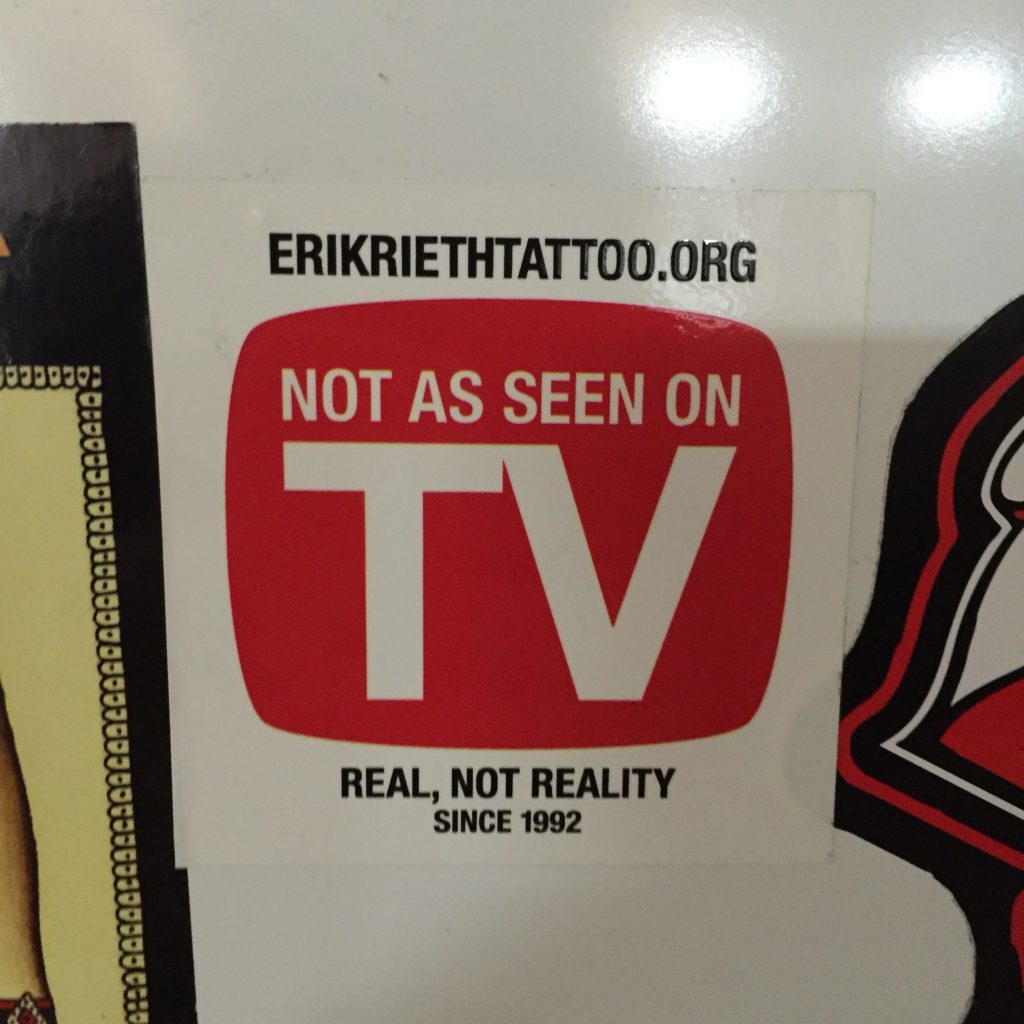