Earlier this year, Kian travelled to Japan to indulge in a rare opportunity to observe one of the true tattoo masters of Japanese tattoo hard at work in his private studio. Gifu Horihide is famous globally, and has had a huge impact on tattoo art and culture as we know it today, and not just in Japan. 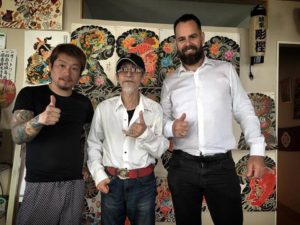 Back in the 60’s Horihide was one of the few tattoo masters who learnt English and he was very intrigued by the American style colour tattoos he saw on American servicemen in Japan. He learnt that these tattoos were done by Sailor Jerry, so he struck up correspondence, and the two kept in touch for several years. After 4 years, they finally met, and exchanged American coloured inks for Japanese motifs. And hence began the cross over of the two styles, influencing each other forever more. 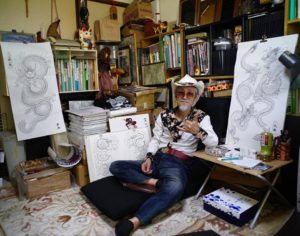 Horihide later became a teacher and main source of information to Don Ed Hardy, a student of Sailor Jerry. When Ed Hardy arrived in Japan in 1973 to study the Japanese style alongside Horihide, he did not know that he become recognized for incorporating Japanese tattoo aesthetics and techniques into his American style work.

Horihide is now in his 80’s, but still tattoos his clients everyday, paints original artworks, and travels to conventions to network and spread tattoo culture. 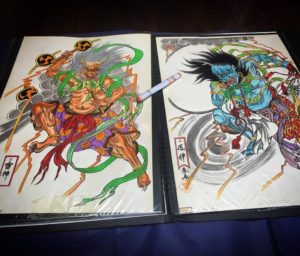