The Sanja Matsuri Festival will be held this weekend in Tokyo at the Asakusa shrine. It is considered the largest and wildest Shinto festivals in Tokyo. The festival is held in honour of the three men who established and founded the Asakusa shrine. The parade centres around three mikoshi, which are portable shrines, and involves lots of traditional music and dancing, however there are also around another 100 smaller mikoshi also roaming the streets of Asakusa. Around 2 million people will travel to Asakusa to partake and observe this religious parade.

The biggest draw card to the tattoo-curious like us, are the Yakuza. This festival is the only one in Japan where the Yakuza can show off their tattoos. Donning the traditional fundoshi, the Yakuza climb on top of the shrines, waving fans and showing off their body suits in all their glory. Below are some pics from Google, but Kian and his apprentice, Logan will be attending the festival, and reporting back not their experience. 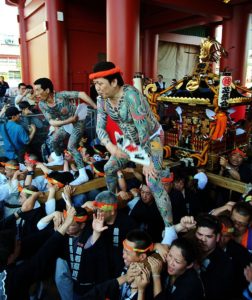 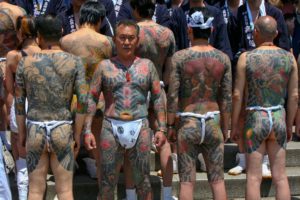 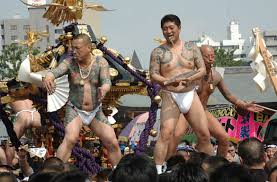