So You Want A Tattoo? Ask Yourself These Questions First - Authent/Ink

So You Want A Tattoo? Ask Yourself These Questions First

File this under ‘advice to remember when drunk’ 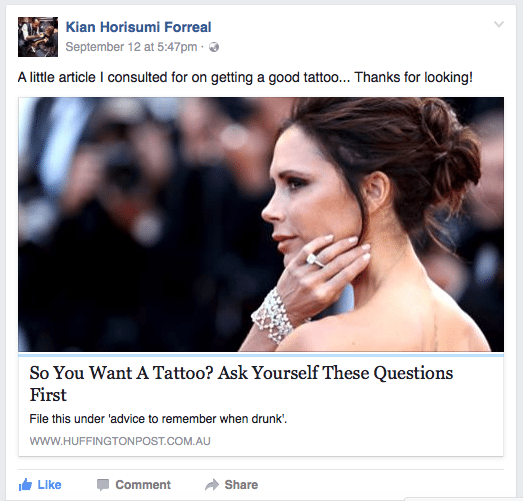 Do yourself a favour and read this before you get your first or next tattoo!

Here are the top things to consider, as per Kian’s advice!

Are you getting it for the right reasons?

People get tattoos for a lot of different reasons — many of them valid — though, following a trend or copying something a celebrity has probably isn’t a good one.

“On the other hand, if it’s to mark a milestone, remember a feeling of if you’re travelling to a new country, by all means, go ahead. I’m all for spur of the moment tattoos too, just make sure it’s nothing dumb. And remember, it’s very expensive and time-consuming to get a tattoo removed.”

“As well as getting something you like, you need to make sure it’s classy enough so that you can imagine yourself with it forever. This means thinking about what it will look like when you’re older, working a different job, at the beach or when you get married.”

Have you thought it out?

“The ideal client is someone who has an idea of what they want but also very open-minded and very open to letting the artist work with them to create a unique design.

“It should be a collaboration between the client and the artist; the ideas you want to convey and then our artistic skill with design and placement.

“You can use pictures as a reference but chances are if you’ve seen it on Pinterest, it’s likely 20, 000 other people probably have the same one. Obviously this is going to happen with smaller tattoos but with big stuff, it’s important to come up with something unique because it would be heartbreaking to see somebody else with the exact same sleeve.”

Is it the right artist?

“You wouldn’t go to a Thai restaurant expecting a good burger, so it’s important to do your own research on an artist that does what you want well. If you want a small geometric black tattoo, you’ve got to find the guy that specialises in that.

“With smaller more basic stuff, any accomplished tattooer should be able to do it properly but it’s still good to find people who are passionate about what they’re doing.

“Make sure you’re not being pressured or if you feel like he doesn’t know what he’s doing, he probably doesn’t.”

Have you done some research?

“Research is absolutely important wherever you go, whether it’s local or in another country. But there’s a difference between asking your friends on Facebook and actually doing your own research.

“Read reviews on Google and Trip Advisor and look at each shop’s portfolio. An important thing to remember is just because a shop had a good name at one point in time, that doesn’t mean the same artists are still there.

“The absolute best sort of research is to ask people with cool tattoos where they got theirs done.”

Have you gone into a tattoo shop?

“The internet is helpful, but the problem is you’re not really going to know what’s real and what’s not real. There are a lot of styles, particularly with smaller tattoos, that are done just for the photograph and once the tattoo heals, they don’t look good.”

A note on small tattoos…

A lot of girls come in wanting small tattoos on their finger, we don’t do any of that stuff because once it heals it doesn’t look good. Tattoos on the fingers and hands don’t absorb ink very well, so while the tattoo might look good for the photograph, the ink gets pushed out and it looks very blue and blobby. It’s also very painful to remove, and because the skin is so thick it’s very hard to laser off.

I don’t recommend people getting tattooed in Thailand or Bali unless it’s someone you know who is legitimate. Not just for hygienic reasons, though that’s a factor, but a lot of the time the tattoos aren’t done by properly trained artist and you’ll get home and regret it because it looks crap.

Sun exposure and your tattoo…

If a tattoo is done properly and it’s been kept out of the sun, you shouldn’t need to get it touched up for at least 15 to 20 years. If you go to the beach and it’s often exposed, it’s not going to last, especially coloured ones. Sunblock doesn’t really do much to protect tattoos — white zinc is the best protection.