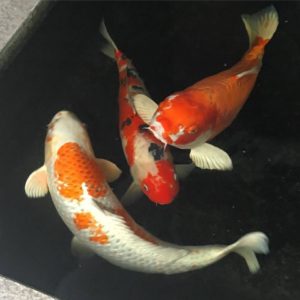 The koi fish arrived from China in Japan in the early 1600’s as prized pets of the rich aristocrats. Considered ‘living flowers’ bred for the unusual shapes and color. Now almost everyone has some in their pond in japan.

In Chinese legend, koi became dragons after successfully braving the Wu Men (five gates) rapids and swimming up the Longmen Falls (dragons gate) on the yellow river in the JiShiShan  Mountain. The determination for this feat gave rise to the expression “passing through the dragon gate” 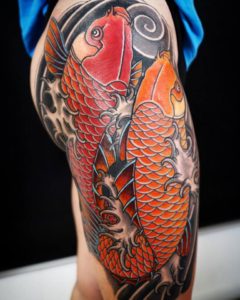 The koi is known as the ‘fish of success’. Pairs of kois symbolize happy marriage and long life, koi also means ‘love’. Koi is also known as ‘king of the river fish’ and can live over 50 years. The koi is a masculine symbol and emblem of the boys day festival in japan where multicolored streamers and banners of carp are flown from poles. Samuari identified with the bravery and tenacity of the koi and celebrated the birth of baby boys with koi-nobori banners outside the homes after birth. 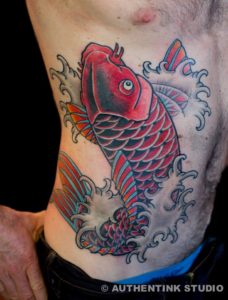 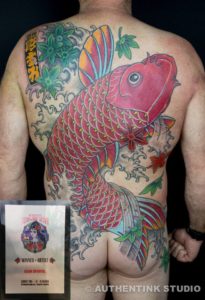 Kois in tattooing are usually swimming upstream against the current and are seen with accompanying cherry blossoms or maple leaves depending on the season depicted. 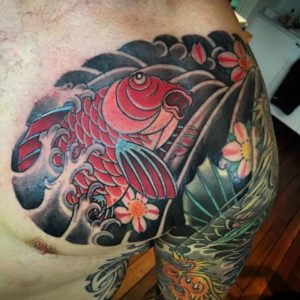