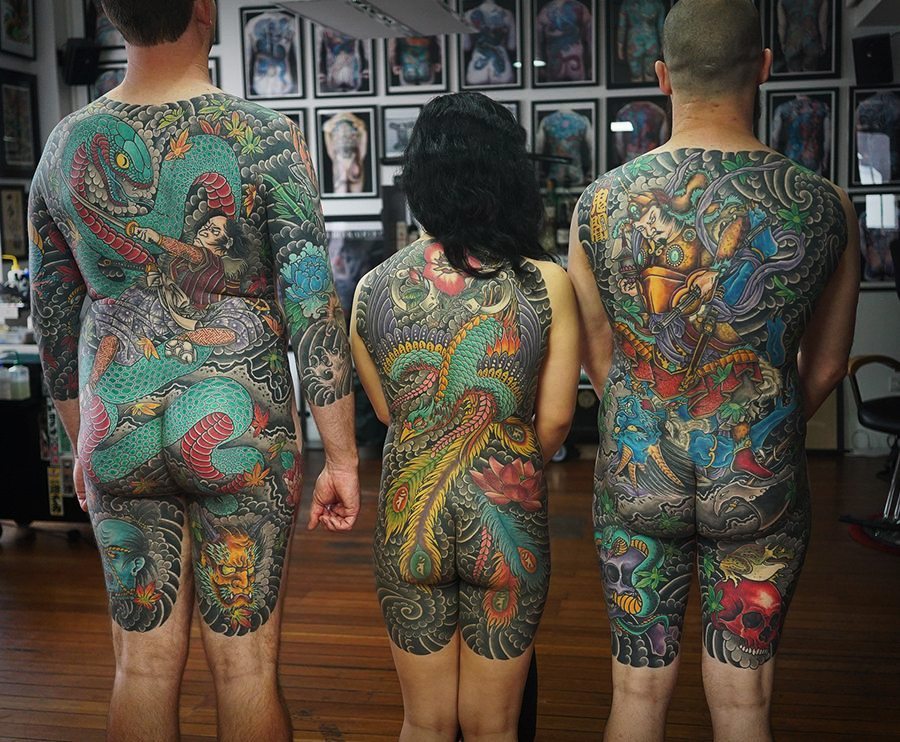 Authentink Tattoo Studio is the world renowned traditional Japanese Horimono (irezumi, wabori, Japanese tattoo) specialist studio based in Sydney, Australia, famous for the many unique styles of traditional Japanese tattooing that are being created in the studio. We have 4 artists that create their own unique style of Japanese Tattooing and whom are wholly dedicated to creating authentic Japanese style irezumi, both wabori (machine) and tebori (hand poke) and practice this style of the craft every day the studio is open. 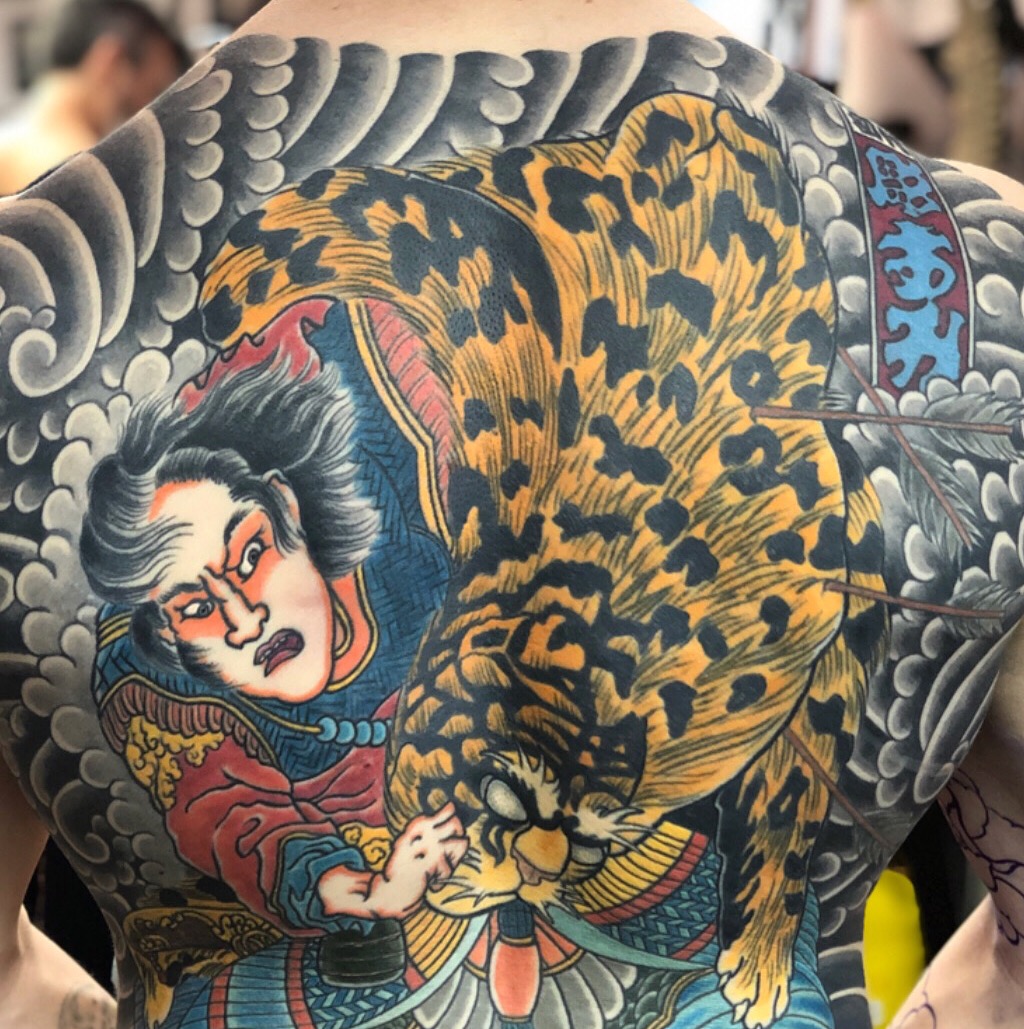 Stories about the 108’s Hero of the Suikoden (AKA, The Water Margin, Outlaws of the Marsh, Tale of the Marshes, All Men Are Brothers, Men of the Marshes, or The Marshes of Mount Liang). These stories were first illustrated by Japanese Artist Hokusai and then later were made into colour woodblock prints by Kuniyoshi. These prints are what most Traditional Japanese Tattoos are based on.

What is irezumi?
Irezumi, also called Horimono and Wabori, refers to a traditional Japanese style of tattooing that is created using large scale motifs based on Japanese mythology and religious icons, historical characters and scenes from nature, the elements, and well known Japanese fables. Irezumi is known for its dark and vast backgrounds based on water, wind and clouds that encompasses the entire area around the main motif and fills the body part being tattooed, including the whole body except hands, feet, head, face and neck in the case of a proper traditional bodysuit.

What is the method of irezumi?
Originally all Japanese tattooing was done by the hand poke ‘tebori’ method of tattooing where a group of needles is fixed to a tool called a sashibo and the tattoo is created by ‘carving’ the tattooing into the skin, it is less a carving technique and more akin to pushing the ink into the skin rhythmically. These days most Japanese tattooing is done by machine both inside and outside of Japan, although there are traditional craftsmen that still work in the old ways.
Tebori is a much more relaxed process involving less skin trauma, less pain, less bleeding and is the preferred technique over machine by those in the know seeking a true traditional tattoo because of its richer colours and deep saturation.

What does irezumi and Tebori mean?
Irezumi translates to ‘Insertion of black ink’ IRE – to insert and ZUMI – black ink.
Tebori means ‘hand carve’ TE – by hand and BORI – carve, and is a reference to the woodblock carvers of Edo era Japan that carved the blocks for the woodblock prints that many irezumi designs are based on.

Where can I get Traditional Irezumi and Tebori Irezumi done in Australia?
Horisumi Kian Forreal is Australia’s foremost Irezumi Tebori practitioner, trained in Japan and Europe, he specialises solely in traditional Japanese tattoo and has 30 years tattooing experience, he creates all of his tattoos by hand in his Sydney based tattoo studio, Authentink Tattoo and has been mentored under worked with the leading traditional Japanese tattoo masters of our time. Working with Horisumi is a team of artists that also specialise in machine irezumi and can create masterful Japanese tattoos in the traditional style using modern methods. See the artist portfolios or ring the studio on 8399 1973 for more information. 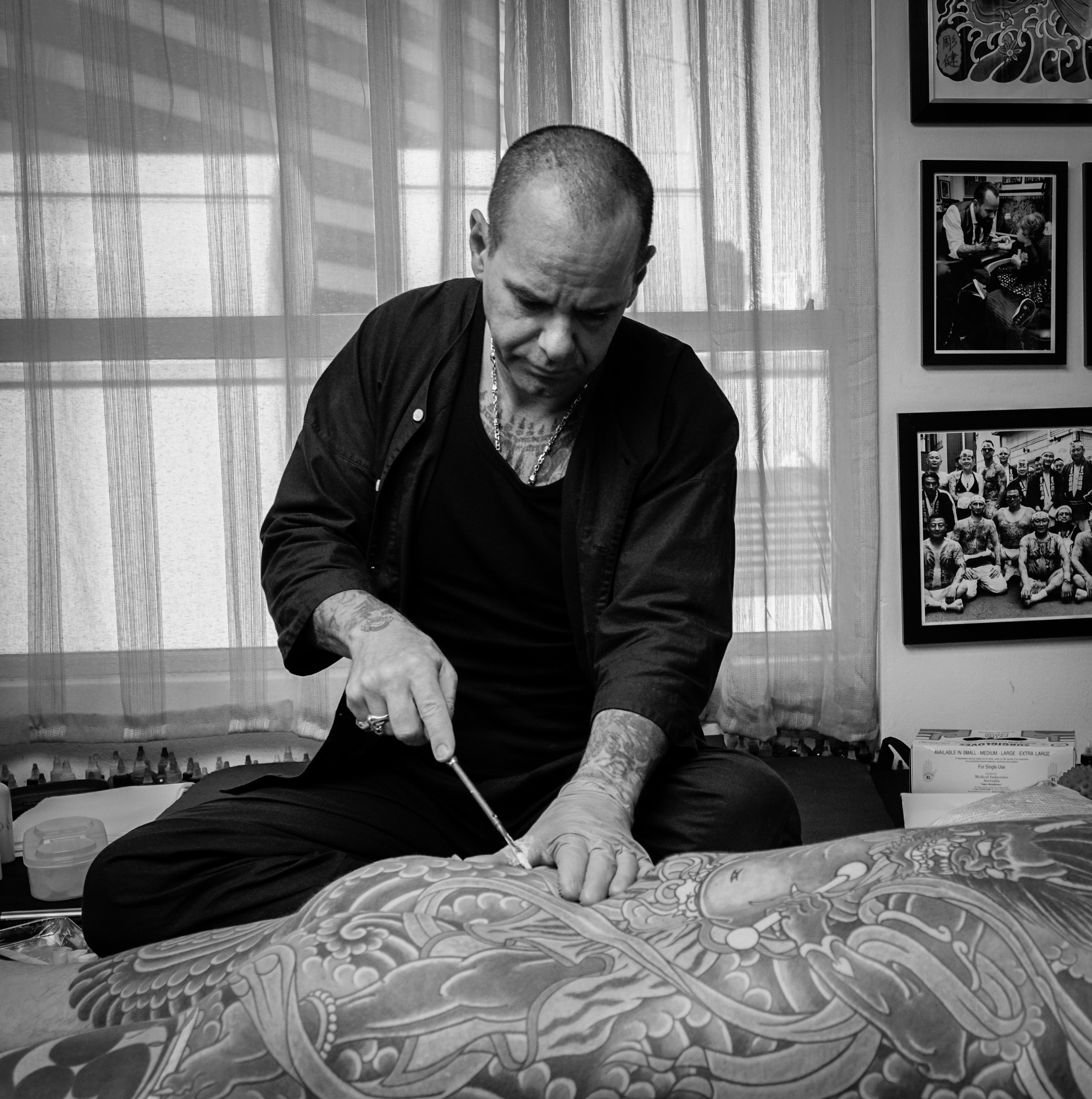 Horisumi has been practicing the craft of tebori for years and now works mostly in this style, he still makes his outlines by machine as do many tebori artists. All colour and shading is done by tebori and of course anyone already being tattooed by him with machine can get their colour by tebori and the benefits that entails; richer colour, faster healing, less pain and more benefits along with joining a rich tradition of hand made tattoos. 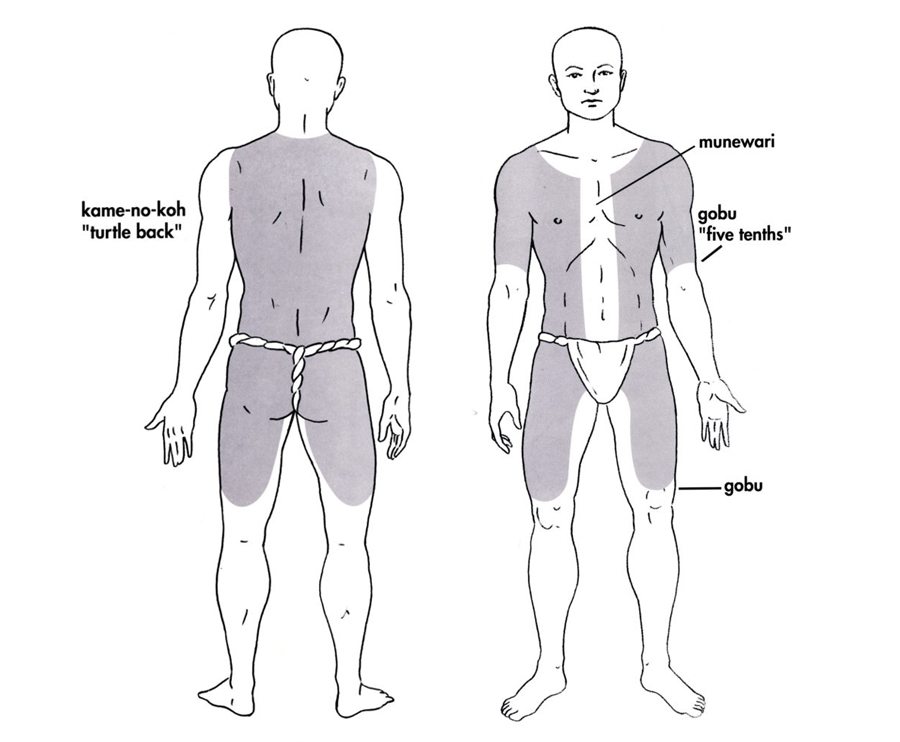 The central part of a Japanese bodysuit is the backpiece with full background or (nukibori/kame-no-koh)   which occupies the whole backside from neck till about 20-30 centimetres below the crease of the buttocks. This is the biggest area of the body that can be tattooed and viewed at one glimpse. The rest of the tattoos support the story you want to tell with the backpiece.   The subject matter is enhanced by a background consisting of the traditional elements such as spiral clouds, clouds, rocks, water, fire, waves and wind bars.

Potentially you can add secondary elements to this to specify seasons or atmosphere, like cherry blossoms, peony, chrysanthemum or maple leaves, which then become a recurring element throughout the bodysuit.   You can start and interrupt a Japanese bodysuit in several ways. It is important to note that there are different ways to tattoo a man or a women.   For example you start with the backpiece,  generally speaking for a man you would create a backpiece with a background (nukibori), which makes it more powerful and pronounced. For a woman, and this is generally speaking, we don’t always use the background right away so as to make it more feminine in the beginning (gakubori), once sleeves are added or more body work is desired, then a background can be added to tie it altogether. However a woman may certainly elect to have a background added from the beginning if she desires the strong look of a determined female. 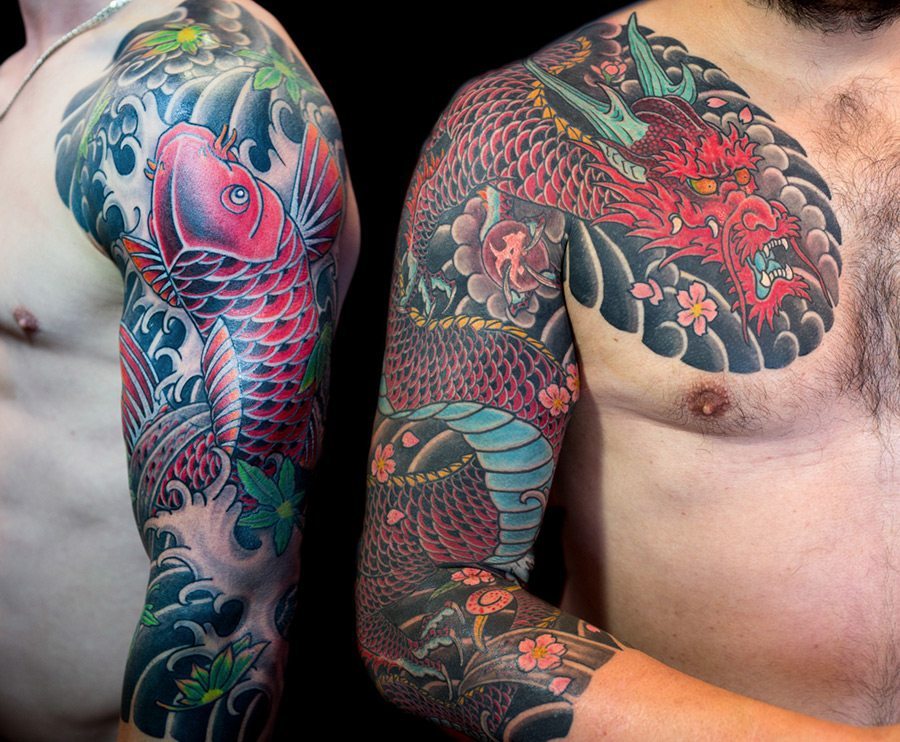 Next step are arms and chest tattoos. For males the chest plate or ‘hikae’ covers most of the pectoral area, 2-4 centimeters from the middle of the chest to 2cm above the nipple and following along the collarbone up top. A strong chest plate really makes a sleeve look great!  For a woman just a little more shoulder in the front going to the chest but not all the way on to the chest muscle, this creates a nice feminine look while staying true to tradition and finishing off the sleeve properly.

Arms can be full sleeve (nagasode), 3/4 (shichibu) or half-sleeve (gobu) for men and be within tradition and also create a strong powerful Japanese Tattoo look. Everyone will have their own opinion and work requirements may dictate otherwise but I believe and traditional Japanese tattoo would favor that for females it should always be a 3/4 sleeve, this gives it a distinguished feminine look, not too hard and not too serious. A ½ sleeve on a woman may look too strong for some women and a full sleeve may be too much unless there is other serious body work present to accentuate the full sleeves.

Themes from left and right are sub-divided into feminine themes on the left and male themes on the right. An example is a dragon with an open mouth on the right, a dragon mouth closed on the left. Another example could be a koi swimming up on the right, a koi swimming down on the left. The elements and the background of the arms are consistent with those on the back. Subject matter on the front correspond with the story of the backpiece.   Although this sequence is interchangeable which means you can start arm/chest then the other arm/chest followed with a backpiece.