May 2018 will mark the 25th year of Kian Horisumi Forreal’s professional tattoo career. His career started in his home town of Toronto, Canada and has seen him travel across the US, Europe, much of Asia and now settled in his own semi-private, custom tattoo studio in Sydney, Australia.

Kian learned how to tattoo in Toronto, Canada under the tutelage of David ‘Crazy Ace’ Daniels. He began studying, researching, drawing, and learning to tattoo with homemade tools and equipment on his own in 1986 and has been tattooing professionally worldwide since 1993 after paying his dues working for real tattooers in real shops for 5 solid years doing ‘flash and walk-ins’. Kian has worked with and learned from some of the best tattoo artists living today at some of the finest tattoo shops around the globe .

Fast forward to 2013, Kian was given the honour of a traditional Japanese tattoo name of “Horisumi” by Master Horiyoshi III, for his 20 years of  hard work, dedication, commitment and contribution to tattooing. 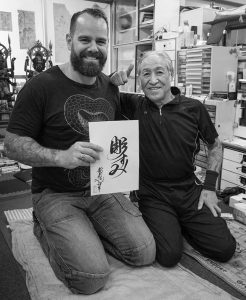 Horisumi’s recent accomplishments have not just been limited to tattooing. His  passion for Japanese art, culture and history has lead to him giving lectures and seminars at the prestigious Art Gallery of NSW, Newcastle Museum, the Japan Foundation of Australia and tattoo demonstrations at the Power House Museum in Sydney,  as well as appearances on current affairs tv, radio and newspaper & online national publications.  He has also collaborated in design projects with Rats Get Fat x Culture Kings, Sake Restaurant Group, Tiger Beer and local distillery Archie Rose.

Outside of Authentink Tattoo Studio, Kian is a family man with a wife, 3 year old daughter and another baby on the way in May. His passion for travel, the outdoors and nature goes hand in hand with his love for Traditional Japanese Tattoos.